In this eight-session virtual ZOOM memoir writing class we will examine various aspects of storytelling. Through writing exercises we explore the tools of the craft that brings writing to life. The course will culminate with a ZOOM sharing public performance. 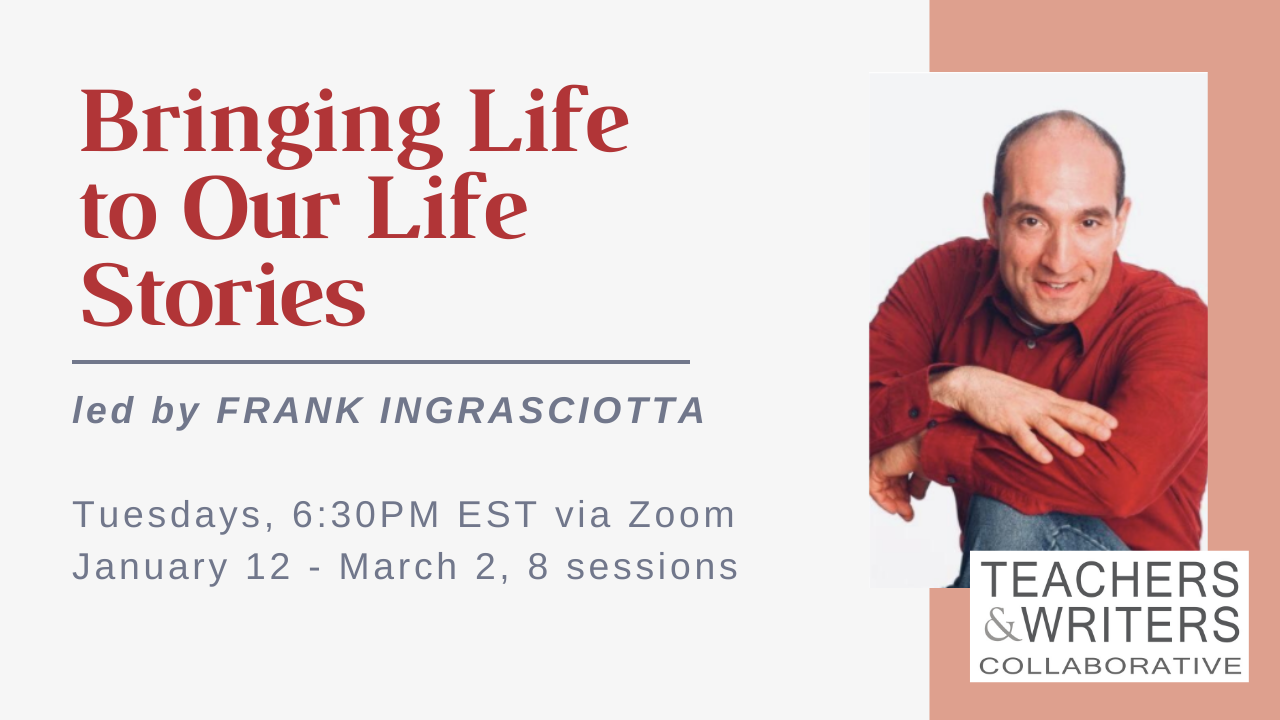 There are currently no tickets available for this event, but you can still make a donation.

Have you ever wanted to write a memoir but didn’t know where to start? In this workshop you will learn, step by step, how to bring your stories to life on the page. You’ll get feedback from writer and teacher Frank Ingrasciotta to help you polish your work and develop your personal writing style.

Storytelling is our most ancient art form and everyone has a story in us that wants to be told. When powerful storytelling resonates, it creates shared experiences of commonality that bonds us as a community. In this eight-session virtual ZOOM memoir writing class we will examine various aspects of storytelling. Through writing exercises we explore the tools of the craft that brings writing to life. The course will culminate with a ZOOM sharing public performance.

FRANK INGRASCIOTTA (Actor/Playwright/Director/Educator) is the writer/performer of the acclaimed Off-Broadway solo play Blood Type: RAGU. In this heartful and hilarious coming-of-age story, Frank portrays over 20 characters recounting his experiences growing up in a first-generation Italian immigrant household as he explores the themes of culture, identity, and forgiveness. Blood Type: RAGU has received numerous awards and accolades and continues to tour performing over 1,000 shows nationally and internationally. As an actor Frank has appeared in the original Off-Broadway production of Godspell, Valley of the Dolls, Three Postcards, What Would Nora Ephron Say?, Dinner at 8, as Edgar Degas in The Girl in the Blue Armchair, and the Pharaoh in Joseph & the Amazing Technicolor Dreamcoat at Lincoln Center. TV: Five years as Rene Buchanan’s head maître d’ on One Life to Live, other recurring roles on The Guiding Light, All My Children, ABC Afterschool Specials, and The Equalizer. FILM: Featured roles in the award-winning SAG films Figs for Italo and Brooklyn in July that can presently be viewed on AMAZON Prime. DIRECTING: Three years as writer & producer for the New York Cable Follies, a live musical satire of the year's events in the cable industry, performing to TV network CEOs and executives. For the NYC Fire Department, he directed and choreographed firefighters in a benefit production of Guys & Dolls receiving media coverage & raising over $20,000 for the New York Burn Center. As an arts educator, he conducts workshops in acting, and creative writing with incarcerated adults and students of all ages. He holds a Theatre Arts‑in‑Education degree from SUNY Empire State College, and studied the Meisner acting technique with William Esper.

You can support us by making a donation!